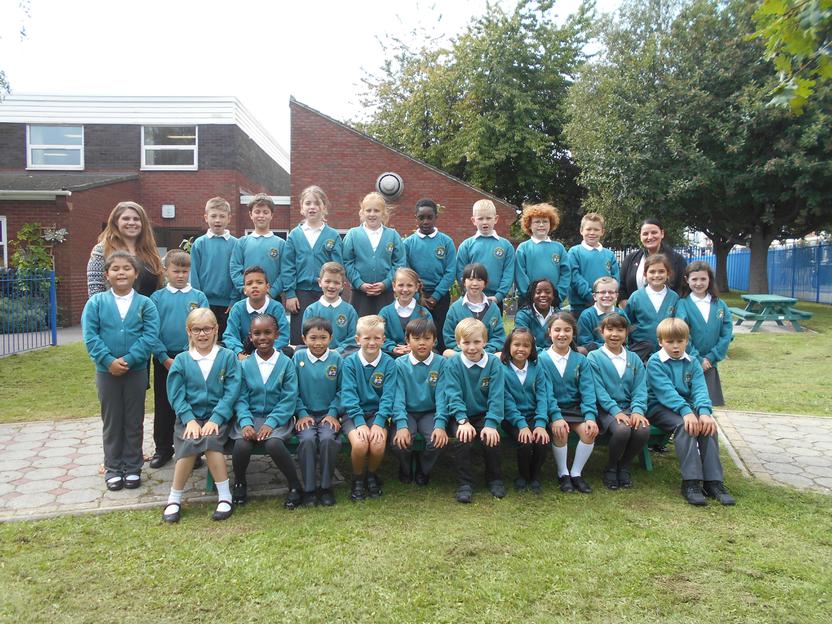 Some of the children from Year 4 and 5 attended a fantastic Steel Pan workshop at Northern Parade Junior School and thoroughly enjoyed it. The children made fantastic progress during the workshop and the leader was very impressed with their musicality. 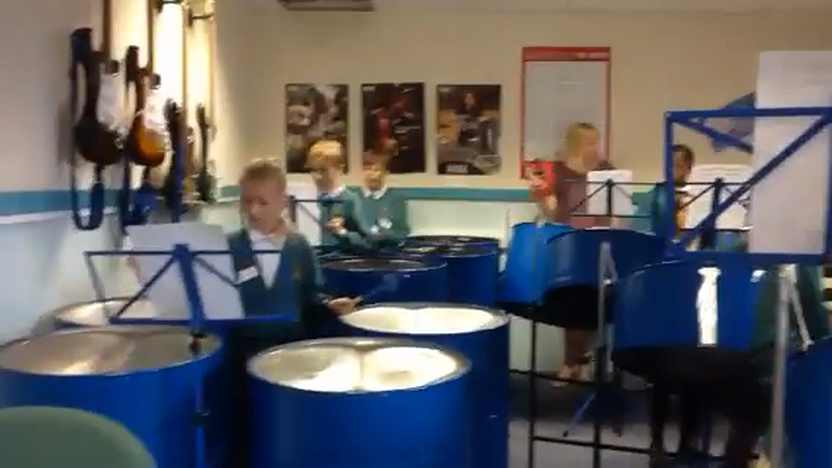 Recently, Year 4 set off to visit Fishbourne Roman Palace, keen to experience what life was like in Roman times. Children dressed as slaves and enjoyed a range of activities: from making their own mosaics; spinning wool and using wax tablets to writing Roman letters. Preparing food in the Roman kitchen was especially popular.

After a very enjoyable workshop led by Charley, the children explored the Roman artefacts in the museum and the amazing mosaics. It was great way to learn about Roman life.

To start off our unit on The Ancient Greeks, we were lucky enough to have a whole day drama workshop. We had the opportunity to dress in traditional Greek clothing and explored many elements of this era through drama, including how we imagined the first Olympics to have been, and what would have happened.

Congratulations of our Pupil of the Term 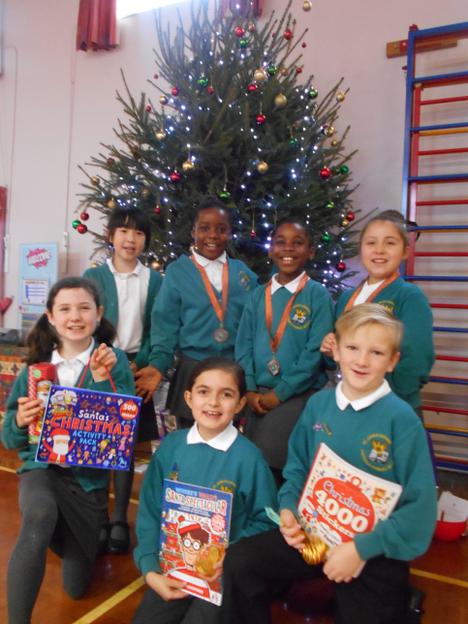 RE – Prayers, Saints and Feasts

In order to reflect on how Mary felt when taking the time to calmly and silently reflect on Jesus’ word and spend time with him as explored in the Gospel Luke 10:38-42, we went to the school prayer garden. We spent a few minutes in silent prayer, connecting with Jesus and thinking about what he wanted from us today. Some children chose to kneel, others were more comfortable stood. Some children wanted to write their thoughts so recorded them on ribbons and the chalk boards to that they could leave their thoughts with Jesus in the garden.

In groups of 4, we debated our ideas about who did the right thing when Jesus came to visit, either Mary or Martha? Children in Amos, Jonah and Exodus debated that Mary made the right choice by sitting and spending time with Jesus. Genesis and Jeremiah had to argue that Martha had made the right choice by preparing for Jesus, while also pre anticipating the counter argument that the other group may present.

The discussion took place over a 30 minute period, with the stimulus of the Lord’s Prayer, and the gospel reading Luke 11:1-4, where Jesus introduced the prayer to his disciples. The children had already had a lesson to discuss the prayer and its meaning, in which they identified the most important messages in the prayer, as well as highlighting ways in which we follow those teachings from Jesus in our lives today.

The discussion was led by the children, with those talking, then selecting the next person who wished to contribute to the discussion, signaled by the child placing their hand on their shoulder to show that they had an idea. The children were given the following sentence starts, which they had to use to contribute their ideas clearly, and give reasons for their opinions. 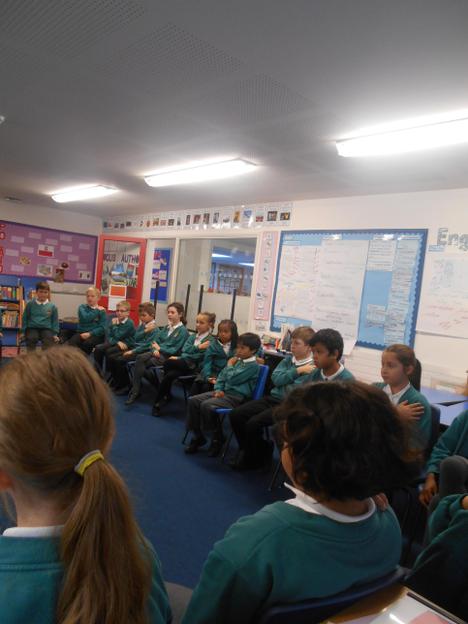 To continue our work on decimals, we used practical resources to look in detail at the place value of tenths and hundredths. The children explored using base board, number tracks, bead strings and place value boards. We also had a real focus on mathematical vocabulary linked to place value and decimals, discussing: integers, tenths, hundredths, thousandths, ascending, descending and quantity, where the children were then encouraged to use the correct vocabulary when discussing their work with a partner and when feeding back to the class.

We established that tenths are larger than hundredths, then used the base board and Numicon to represent numbers to 2 decimal places. After this, we went on to represent the same 2 digit numbers using bead strings and number rods with Cuisenaire. To apply this understanding of place value of numbers with two decimals places, we started to identify numbers half way between 2 integers, then extended to two decimals numbers.

To start our work on fractions, we explored different ways of creating 1/2 using a range of equipment. We also discussed our understanding of fractions and where we use them in a real life context. Examples of which we came up with are things like half a day; half a mile; half a cake; half time; half term; half past; or half of an amount/quantity. We also touched on the fact that 0.5 and 50% are equivalent to ½.

While exploring the equipment, we generated a list of vocabulary related to half that we were using, this included: half, into, fraction, divide, subtract, share, equal, denominator, numerator, decimal, percentages.

We started off the lesson by exploring different ways of representing fractions which are equivalent to ½. The children had a variety of resources to use and we discussed the difference between expressing an equivalent fraction of ½ and representing ½.

To finish off our work on fraction, we worked in groups to produce a board game that would require the players to apply their understanding of fractions, which we would be able to use for the rest of the year as part of our mental starters. The children had to have a focus for their game which could be: addition and subtractions; mixed number and improper fractions; equivalent fractions; finding a fraction of an amount of word problems involving fractions.

To start off the unit ‘Living Things’, we went on a hunt around our school environment to see what was living. From this activities we identified three different types of objects in our environment: Living, Natural and Man-Made. We then grouped these as a class and created the mind map shown.

Topic – Around the World in 80 Days

To finish off our work on around the world in 80 days we worked in pairs to produce a 10 minute lesson that we would teach the year 3’s. The lesson had to teach the year 3’s about one of the countries that Phileas Fogg travelled to, giving them geographical information about this place, such as: the continent it is in; bordering seas; currency; distance from the equator; weather and climate; local attractions and other information which they felt was important to their chosen location.

On the last Thursday of the half term, we split year 3 and 4 in half and worked in both classrooms. Then we set up our activities with all of the resources and presentations that we had prepared in our topic lesson time. The lessons were taught in a carousel of activities, so the year 3 children had a chance to complete 6 different 10 minute lessons. We had to include a presentation to teach them about our location, a follow up activity and a plenary to see what they had learnt. The afternoon was great fun for both us and the year 3’s, with lots of different activities going on, including art work, treasure hunts, quizzes, fact relay, drama, video clips and much more. Even though it was really enjoyable, we did find it hard working having to actually be the teacher.

RE – Other Faiths, Islam

During our unit on Other Faiths, we looked at the Islamic Religion. After reading the story of Mohammad and discussing how he was the last Prophet in the Islamic Religion, the children produced drama sketches showing the life of Muhammad, highlighting the main teachings of Allah that were shown through his life.

To start off our unit on sound, we experimented with different ways of making sounds from both musical instruments and everyday objects. We then generated a list of vocabulary associated with this, including: pluck, tap, shake, flick and bang. We also discussed the fact that different sounds can be created from the same object by playing it in different ways, whether it is a musical instrument or not.